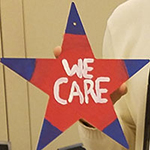 Born out of the tragedy of 9/11 and humanity and volunteer spirit that united the world on 9/12, Stars of HOPE® continues to empower people of all ages to transform communities and individuals impacted by natural and man-made disasters through the power of art and messages of hope and healing. Since 2007, over 80,000 hand-painted Stars of HOPE have lifted the spirits of tens of millions of disaster survivors in 180 communities and 26 countries.

Stars of HOPE volunteers create these powerful messages of hope and healing on colorful one-foot wooden stars that are displayed in public for months and even years after historic tragedies. The stars serve as beacons of compassion for all to see and have made a direct impact on the long-term mental health and resiliency of individuals and entire communities recovering from disaster.

A unique disaster relief and community arts program started by the New York Says Thank You Foundation in 2007, Stars of HOPE has lifted the spirits of individuals impacted by catastrophic acts of nature including the Greensburg, Kansas tornado, the flooding of Hurricane Sandy, as well as communities impacted by horrific acts of violence, including the Sandy Hook Elementary School shooting and the terror attacks in San Bernardino, California, Orlando, Florida, and Brussels, Belgium and Manchester, England.

“After witnessing the immediate and incredible impact of Stars of HOPE in San Bernardino to help survivors and victims’ family members heal, this is tangible proof that supporting the community’s emotional health and well-b 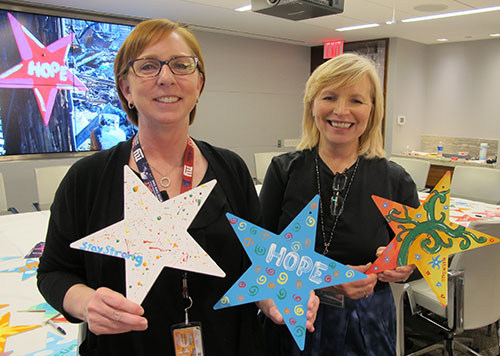 eing after a crisis is just as important as the physical rebuilding and recovery process,” said Suzanne Bernier, Author of Disaster Heroes and President of SB Crisis Consulting.

Presently, Stars of HOPE is actively deploying teams of volunteers across Northern and Southern California where thousands of homes have been lost due to wildfires and the recent devastating mudslide.

Corporate volunteerism is currently being transformed by Stars of HOPE through a new category of in-office, hands-on disaster-relief volunteerism comprised of volunteers in offices around the United States who are helping to make this life-changing transformation possible by expressing their compassion and connectivity through Stars of HOPE. This simple but powerful act of corporate volunteerism has bolstered the spirits and resiliency of those directly impacted by both man-made and natural disasters in communities around the world.

Stars of HOPE is creating a systemic change in the disaster relief community,” said Bob Nakao, Founder and Executive Publisher of Continuity Insights. “It accentuates the resilient spirit of individuals who have been impacted by disaster.”

A recently display of this compassionate spirit took place at the 2017 Continuity Insights New York Conference. Dozens of conferees and vendors in attendance stopped by the New York Says Thank You Foundation (NYSTY) exhibit to learn more about Stars of HOPE and participated in a Stars of HOPE paint event facilitated by members of the NYSTY Team during the lunch break on the second day of the conference. 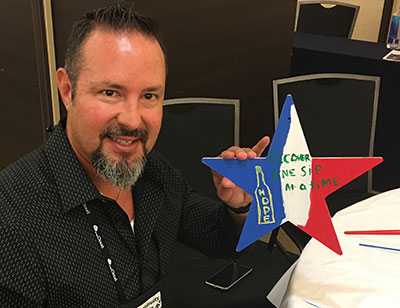 Conference attendee Barry Morgeson, Business Continuity Manager from Southern Glazers Wines & Spirits, said he hoped the people of Napa recovered one sip at a time. He painted a bottle of Merlot and said, Help One Person Everyday – H.O.P.E.

Earlier in the year, Continuity Insights delivered HOPE from its annual Management Conference in Denver to the Denver Rescue Mission at a time when its residents needed it most. The Stars from the New York Conference made their way to Santa Rosa after the wildfires to help bring back community unity and cohesion in Napa.

A Simple Idea That is Changing the World

Stars of HOPE is transforming the way people express compassion and connectivity following disasters. What makes Stars of HOPE so powerful is that it has turned a therapeutic arts program into a community-wide public art installation which extends the healing power of these beautiful stars to thousands of people dealing with the traumatic after-effects of disaster.

Stars of HOPE believes you can give someone else hope – from across the street to across the country and the world. Everyone can be empowered to find the words to paint on a wooden star that will lift spirits – and let people know that they are not forgotten.

Stars of HOPE® is a registered trademark of the New York Says Thank You Foundation. 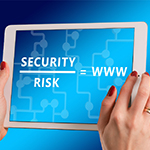 Data Security and Encryption in the Cloud 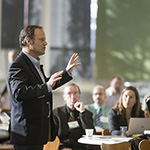 Addressing the Front-Line Needs of Today’s BC Professionals

New Webinar: Observations From When the World Went Sideways 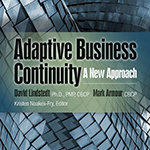 The 16 Most Essential Books for Business Continuity Directors